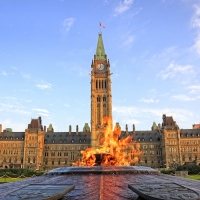 Why; what is driving up Ottawa prices

1. The liberals have made many promises and have added to the Federal Deficit $30,000,000,000 since taking office. So they have need to staff up big time.

2. Military and RCMP moves to the west

...for the Nortel site which finally opened in April 2017 and the Former JDSU site for the RCMP. So new military and RCMP are moving to the west 80% of the time. Prices for houses in 2016 and 2017 were negative to 1% gains for the year. That shift from east Ottawa to west is now over and new public servants to Ottawa are seeing better value for the same house in the East VS the West but military will go West.

...are not hurting the Ottawa market that much. It is severe for people in Toronto but not here. One rule is the Stress test meaning you have to qualify for say a 5% rate vs say 3%. That starts January 1, 2018. Also credit ratings are reviewed more extensively. It reduces buying power quite dramatically for some. However most Federal Public Servants and military do not have a problem qualifying for a Mortgage

What does this mean for the Ottawa Housing Market Prices This spring there will be even more coming to Ottawa but the west will not get as much of an advantage in price increase as the moves to the west by RCMP and Military has mainly already been accomplished by April 2018 by military moving out of Orleans, Rockland, Russell, and Embrun.

So Market demand for homes will be very exceptionally strong in Ottawa this year.